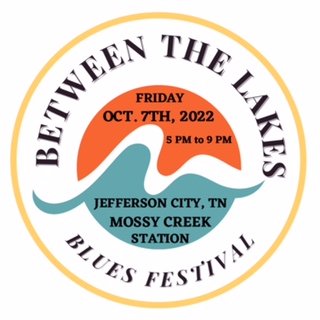 JEFFERSON CITY, TN – Sounds of the Blues are coming to Jefferson City at the historic Mossy Creek Station. The event featuring internationally touring artist, Wayne Baker Brooks will be the start of a new music festival that is planned to take place annually in Jefferson County, TN hosting some of the top names in Blues Music today.

Beginning at 5:00 P.M., Friday, October 7, 2022, at the Mossy Creek Station Venue located in historic Downtown Jefferson City, the Blues Between the Lakes Festival will also feature opening act from Knoxville, Ray Beltran and Bluemax. The festival will continue with “Billy Crawford Band” from Tri-cities from 6:00 – 7:15 PM and ending with our headliner, Wayne Baker Brooks starting around 7:45 PM.

Blues music runs deep in Wayne Baker Brooks’ family. His father is world-renowned Blues artist Lonnie Brooks, who was inducted into the Blues Hall of Fame in 2010 His brother, Ronnie Baker Brooks, is also an acclaimed Blues artist. Wayne follows in his father’s legacy of remarkable music, performing internationally at many top Blues venues and festivals, carrying with him the soulful sound unique to Blues itself. His sound flows between gospel blues and soul, to the electric blues made famous in Chicago, his hometown. Wayne’s entire life has revolved around the Blues and his sound is nothing but authentic. In fact, Wayne states, “I actually co-authored the book on the Blues, Blues for Dummies”.

Wayne Baker Brooks is considered one of today’s top guitarists whose signature style combines powerful vocals with liquid fire guitar playing that honors his rich blues heritage yet effortlessly expands the boundaries of the genre. “Billy Crawford Band” blues guitar might be associated with Mississippi, Texas and Chicago, but a man of the mid-South has something to say about that. The city of Bristol, smack on the Tennessee/Virginia border, claims itself as the birthplace of country music. But one of its native sons is making a huge blues noise.

The common denominator in all of this is Billy Crawford – raised playing bass in church, then gaining an early hard-rock pedigree on electric guitar. But for the past three decades, he has turned his six-string action toward the blues.

Toured with Deborah Coleman for years and recorded on four of her albums.  Played briefly with the Vaughn Brothers “Double Trouble”. Billy Crawford plays occasionally with Wallace Coleman. Event organizer Dan Nivinski, a fifteen-year resident of East Tennessee, has a long history of working with Blues artists and festivals. He produced scores of Blues shows and festivals in Rockford, IL for over 15 years and has worked with famed Blues artists such as Lonnie Brooks, James Cotton, Son Seals, Matt “Guitar” Murphy, KoKo Taylor, Eddie Shaw and The Fabulous Thunderbirds. When asked about his reasons for wanting to bring a Blues festival to Jefferson County and East Tennessee, he relayed that when he saw Wayne would be performing at the King Biscuit Blues Festival in Helena Arkansas, “I called him and he showed an interest in traveling to East Tennessee. Having arranged a dozen shows with his father, and brother near Chicago over the years, I jumped at the chance to do a show with Wayne’s band here in Jefferson County.”

“We’re thrilled to have such a distinguished Blues artist like Wayne Baker Brooks here in Jefferson City, and we’re looking forward to watching the Blues Between the Lakes Festival grow into an annually longstanding festival,” says Lauren Hurdle, Jefferson County Tourism Director.

Local favorite, BBQ 865 Food Truck, will be present at the Festival.

Visit the festival’s website, BluesBetweenTheLakes.com for more information on special guest appearances and additional event information.  For information on sponsorship opportunities contact Richard Hall, richard.financial@psmail.net. The Between the Lakes Blues Festival team advises us that due to adjoining railroad property work there is a possible risk to people with known respiratory conditions or with allergies to preservatives/creosote.