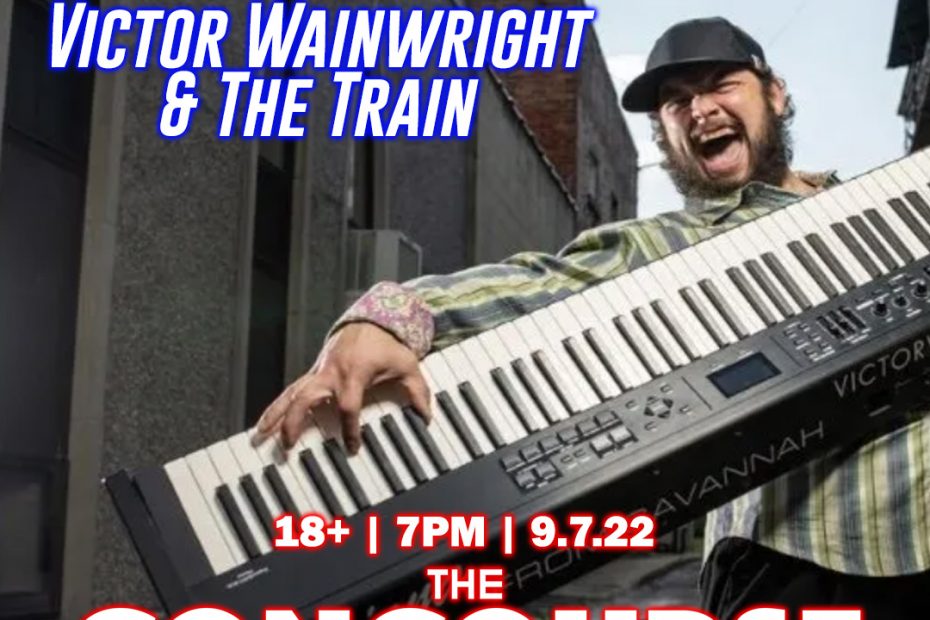 SMOKY MOUNTAIN BLUES SOCIETY is proud to continue our 2022 Schedule with Victor Wainwright & the Train @ The Concourse on Wednesday, Sept. 7th at 7 PM – 10 PM.  Doors open at 6 PM.
Opening act will be Rey Pineda and Friends
Tickets will be $25 for members and $30 for non-members.  Click here to buy tickets

Though Victor Wainwright’s career began over a decade ago with genuine rock n’ roll honky-tonk, Wainwright has broadened his artistic scope over the years to include music representing virtually every corner of the music world.  Composer, producer, vocalist, and award wining entertainer and piano player; Victor Wainwright is a raucous high-octane, dynamic performer and crowd pleaser with soul to spare.

The name of Victor Wainwright’s band – and the sleeve image of their albums – is also the most fitting of metaphors. In music folklore, the train might have associations with the freight-hopping bluesmen of yore, but with this restless boogie-woogie innovator stoking the furnace, Wainwright is a charging locomotive – surging forward, crashing through boundaries of genre, sweeping up fresh sounds and clattering headlong past the doubters.

As the man himself hollers in the ivory-pounding track, The Train: “If you wanna boogie get aboard the train/Get yourself a ticket or get out of the way…” At a sweet-spot in his career, where most established stars would rest on their laurels, Victor Wainwright & The Train instead rips up all that has gone before, pricking up ears in a sterile music industry.

In truth, Wainwright has always been an artist that sets the pace. Born into a musical family in Savannah, Georgia, the formative influence of his father’s vocals and grandfather’s rolling boogie-woogie piano compelled him into a life of music. By 2005, he’d announced his talent with solo debut, Piana’ From Savannah, while his central role in Southern Hospitality and partnership with Stephen Dees in WildRoots has seen him ignite stages and stereos for over a decade.

Among his numerous accolades: Wainwright has won six total Blues Music Awards, charted #1 on the Top 10 in the U.S. Billboard and was Nominated for a 2019 GRAMMY.

A man of many talents, Wainwright is a composer, producer, vocalist, piano player and award-winning entertainer. A long-standing leader of the boogie-woogie pack, he could refer you to his BMA and long list of Blues Blast trophies, or a catalog that has repeatedly hijacked the Billboard Top 10. But rather than dine out on past glories, this questing artist would rather you joined him for the ride ahead. “Of course, I still play and write songs that are just about kicking ass and taking names,” he laughs. “But if you listen, what I’m really saying is, we got to get on the train and move forward with our love of roots music, together.”

Check out Victor Wainwright & the Train live Videos from Jazzfest 2019: Victor Wainwright & the Train live performances are family oriented, energetic and most of all fun.  This is a show you don’t want to miss!

Come on East Tennessee Blues Lovers let’s welcome this band with a sell out crowd!